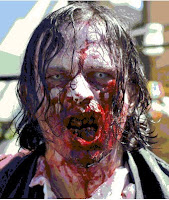 A worried member of the Tefl profession has forced the British Council to admit it is unprepared for a zombie invasion of under-qualified ‘instructors’. The BC received a Freedom of Information request which said provisions to deal with such an attack, often seen in teacher-training horror films, were poor.

The ‘concerned Tefler’ said the possibility of such an event was one that the Council should be aware of, especially when considering that the salaries offered for many of their teaching posts were so much below par that the term ‘instructor’ is now used in their recruitment advertisements.

That Letter in Full

Can you please let us know what provisions you have in place in the event of a zombie Tefler invasion? Having watched several teacher-training films, it is clear that preparation for such an event is poor and one that British Councils throughout the world must prepare for – a sudden influx of under-qualified instructors who are hired on the cheap.

Please provide any information you may have.

"We've had a few wacky ones before (i.e., teachers), but this request did make us laugh," said Sharon Slapper, head of Information Governance at the British Council in London. Ms Slapper said she was unaware of any specific reference to Tefl zombies in the BC’s current recruitment plan, but some elements of it could be applied if the situation arose.

“BC used to insist on teachers with a Diploma at least” she continued “but nowadays we’ll take anybody with a Mickey Mouse Tefl certificate, as long as they’re prepared to work for ‘local salaries’ – peanuts, in other words”. However, she expressed the opinion that the organisation would draw the line at zombies and Crystal Palace fans.

However, Ed Thurlow, who runs zombie website Terror4Fun, said he felt a Tefler zombie invasion of the British Council was highly likely. "I’ve seen some of these types hanging around language schools in Oxford during Summer, and they really scare me. I reckon that this ‘Concerned Tefler’ has got something here” he stated, before disappearing behind a well-known chain school pursued by garishly-painted teenagers clutching newly-acquired Tefl certificates.
Posted by The TEFL Tradesman at 9:01 PM 18 comments: